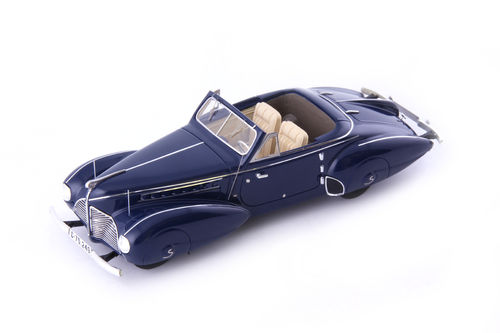 Fancy outside – reliable inside

As with end of the 1920s it became clear that automoblie production was a luctrative business, the management of the company Aero decided enter this business field. Founded in Prague 1919, the company actually earned its money with the production of airplanes. In 1931 Aero entered the automotive market with a small car named Aero 10. Shortly afterwards the Aero 16 followed and in 1934 the company presented its first car with front-wheel drive – the Aero 30.

Highlight of the car range was the Aero 50, which was initially presented in 1936. Fitted with an enlarged two liter, water-cooled four-cycle engine with a performance of 50 hp the car ranked among the upper-class automobiles back then. Absolutely up to date and forward looking was the chassis with oscillating axles. According to the well-heeled customer’s liking the Aero 50 models were fitted with appealing body design – customers could choose between a roaster or sedan version. The Aero 50 was available until 1941 and the figure of 1,205 built copies most probably put a smile on the faces of the management members. Of course there were some buyers who were not satisfied with the standard body and therefore commissioned a customized car body at specialized body makers. Five of those customers took up the offer of the company ‘Carrosserie Sodomka’ and had their customized streamlined bodies built to stand out from the masses as from 1939.

Based in Vysoké Mýto the company evolved into a first-class body maker thus the customized cars bore the company’s name within their type designation. Sodomka adapted the principles of aerodynamics to its bodies early on, but never such distinctive like with the Aero 50 Dynamik.