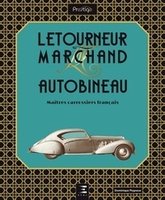 Letourneur & Marchand was located in the prosperous Paris suburb Neuilly-sur-Seine. The company was founded by Jean-Marie Letourneur and Jean-Arthur Marchand in 1905. By the 1930s Letourneur et Marchand was specialising in coachbuilt car bodies for fitting on chassis from luxury automakers such as Bugatti, Delage, Duesenberg, Hispano-Suiza, Rolls-Royce and Minerva. Letourneur & Marchand hat its last appearance at the Paris Salon in 1959. They collapsed in 1960 following the discontinuation of their cabriolet version of the Renault Frégate.